Ukrainian President Volodymyr Zelensky spoke with his American counterpart Joe Biden on Tuesday and discussed the imposition of anti-Russian sanctions on Moscow. According to Zelenskyy’s Twitter post, the two leaders discussed defense assistance to Ukraine to prevent Russia from further escalating the deadly conflict. “US leadership on anti-Russian sanctions and defense aid to Ukraine has been discussed. We must stop the aggressor as soon as possible,” the Ukrainian president wrote.

Hours after Zelenskyy released the information regarding his conversation with Biden, the latter also took to the microblogging site and said that they both had discussions about continuing support for Ukraine – security and humanitarian aid. According to Biden, Ukraine needs both aids to defend against Russian aggression. Additionally, POTUS Biden said the United States will hold Russia accountable for the ongoing crisis situation in Ukraine.

“I just spoke with President Zelenskyy to discuss our continued support for Ukraine – including security and humanitarian assistance – as it defends itself against Russian aggression. We will hold Russia responsible, and our sanctions are already having a devastating impact,” Biden wrote on Twitter. 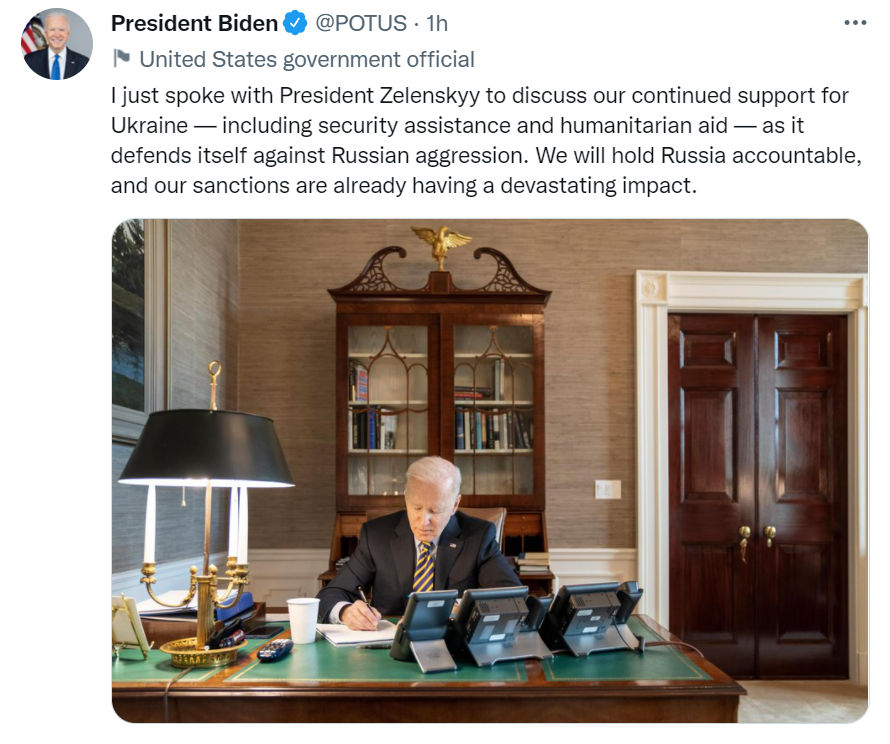 Notably, earlier today, Zelenskyy had several phone conversations with world leaders. According to details shared by Zelenskyy on his Twitter account, he has spoken with the German Chancellor, Olaf Scholz and the British Royal Family. “Had a phone conversation with Chancellor @OlafScholz. Spoke about Russian bombing of residential areas in Ukrainian cities during peace talks. Stressed the need to close the skies over Ukraine. The work on Ukraine’s accession to the #EU must be accelerated”, he stressed.

Nearly an hour after Russian forces struck Ukraine’s main Babyn Yar Holocaust memorial in Kyiv while targeting the nearby TV tower, killing five people, Zelenskyy took to Twitter and said: “History repeats itself”. In particular, he was referring to the 1941 massacre in which more than 32,000 Jews were killed by Nazi occupiers during their ill-fated Russian “Mission Barbarossa” campaign against the Soviet Union during World War II. According to historians, Soviet prisoners of war, communists, Ukrainian nationalists were also killed in the massacre.

It should be mentioned that the country has been witnessing a large-scale invasion by Russian forces since February 24, after Russian President Vladimir Putin launched what he called a military operation against his neighboring country, Ukraine. According to Kyiv Interior Ministry adviser Anton Herashchenko, at least ten people were killed and 35 others injured after a rocket hit Ukraine’s second-largest city, Kharkiv, on Tuesday. According to Herashchenko, the building was hit by a cruise missile.