The cabinet on Sunday approved an ambitious plan to plant 450,000 trees in urban areas to provide shade and help cool temperatures as climate change takes hold.

“The Israeli government has made the climate a national goal,” Bennett said. “More than 90% of the country’s people live in urban communities, and the warmer the climate becomes, the more difficult it will be to move outside.

“That’s why we are preparing to plant about half a million trees along all the roads of the cities we pass through.”

Shade from trees significantly improves temperature conditions on the street, while helping to improve air quality and absorb heavy rains, he added.

Ultra-Orthodox families picnic in the shade of trees at Sacher Park in Jerusalem during their summer vacation, July 26, 2019. (Olivier Fitoussi/Flash90)

Zandberg said cities needed more shade, trees and nature-based solutions to deal with climate change, and it was time for the government to make a decision that would ensure urban planning adapts to changing climatic conditions.

Forer said the plan would achieve a dual goal: protecting the environment and improving urban space.

The decision is based on the report of an inter-ministerial committee which met for a year under the leadership of the National Economic Council in the Prime Minister’s office. In addition to government departments, the committee also included representatives from NGOs and the Planning and Construction Council. 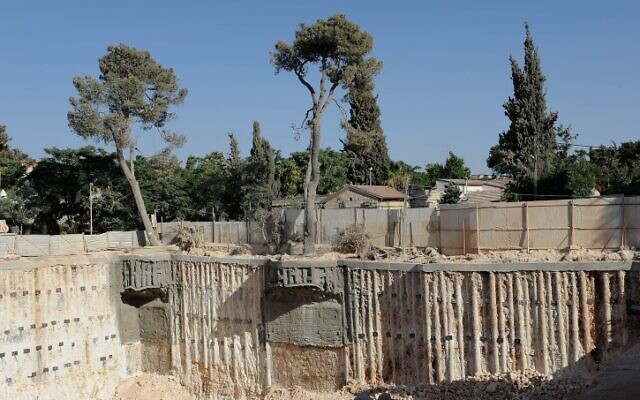 Mature trees are supported by a concrete casing at a construction site in the German Colony neighborhood of Jerusalem on June 12, 2013. (Zuzana Janku/Flash90)

Next steps will include mapping current tree cover in cities and towns, encouraging local authorities to create climate change plans that include planting urban trees, securing necessary funds, creating a user-friendly digital platform that will make public – among other things – requests for tree felling and updating green building regulations to take into account existing trees and opportunities to plant more.

One of the goals is to have 100 local authorities with urban forestry plans by 2030.

The ministries concerned must work together on a funding proposal for the 2023-2024 budget.

During a global pandemic, a small country produces research that helps guide health policy around the world. How effective are COVID-19 vaccines? After the first two injections, does a third dose help? What about a fourth?

When The Times of Israel began covering COVID-19, we had no idea our little beat would become such a central part of world history. Who could have known that Israel would be the first at almost every step in the history of vaccination – and generate the research so urgently needed today?

Our team covered this story with the rigor and precision that characterize Times of Israel reporting on all topics. If it is important to you that this type of media organization exists and thrives, I urge you to support our work. Will you join the Times of Israel community today?

Already a member? Log in to stop seeing this

Are you serious. We appreciate that!

We’re really glad you read X Articles from The Times of Israel over the past month.

That’s why we come to work every day – to provide discerning readers like you with unmissable coverage of Israel and the Jewish world.

So now we have a request. Unlike other media, we don’t have a paywall in place. But since the journalism we do is expensive, we invite readers to whom The Times of Israel has become important to help support our work by joining The Times of Israel community.

For just $6 a month, you can help support our quality journalism while benefiting from The Times of Israel WITHOUT ADVERTISING, as well as access to exclusive content available only to members of the Times of Israel community.

Already a member? Log in to stop seeing this